With two regular seasons in the books, former San Diego State standout Kawhi Leonard seems to be right on the cusp of going one of two ways. He could either continue to build on the type of role he currently has with the San Antonio Spurs, or he could explode into a go-to star who can be a consistent #1 or #2 option for a contender. At just 21 years of age, what does the future hold for him?

Coming out of college, Leonard was somewhat of an unknown nationally. The Spurs, who have a knack for finding talent like Leonard, quickly showed they knew what they were doing. He made the rotation as a rookie, and took on an increased role in 2012-2013. This regular season, he started in all but one of his games played, and he averaged over 31 minutes per game.

What fantasy basketball players, and really, the NBA in general, are taking note of is that this season, the Spurs really showed their age. Yes, they appear to be getting healthy just in time for a playoff run, but how much longer can their core play at a high level. Tim Duncan and Manu Ginobili seem to be wearing down, which means that Tony Parker will need a new running mate to carry the offense.

At 21 years of age, Leonard appears to have all the tools to make him a special player. He can defend either wing position well, he shoots the ball well inside and outside and he can rebound. Right now, he fits the role perfectly of a nice, complimentary player for a championship contender. Can he be the man though?

It appears as though the Spurs are grooming him to take over a bigger role. He took more three this year, especially from the corners. He also showed more confidence in creatng off the dribble. This is something he was always able to do in an Aztecs uniform, but doing it at the NBA level can be difficult. His biggest adjustment will be creating his own shot on a consistent basis. He is getting a lot of his shots up to this point in the NBA off of penetration by Parker. If he becomes the #2 or even the #1 scoring option for the Spurs in a year or two, he needs to be more confident in creating his own shot.

Daily fantasy sports players already love Leonard for what he brings to the table, but his value could continue to rise as the older Spurs lose their edge. It seems very likely that in two years, the Spurs could consist of a Parker-Leonard combination to get things done on the offensive end.

FanDuel.com is a fantasy sports website whose mission is to transform the world of fantasy sports with daily games. They are passionate about the huge advantages the daily format has for players: super-charged excitement and competition, massive prizes, fast payouts and unbeatable game selection. They strongly believe these reasons will drive it to be bigger than traditional fantasy sports. What are you waiting for? Check out the website now!

Charlie Sheen was recently seen wearing Aztecs gear at one of San Diego State’s most recognizable spots. To his left was all nine of the Aztecs’ Mountain West Championship trophies. (Photo Credit: Joey and Hunter Hewitt)

He must have. At least for a semester or two. Or maybe he just attended a few parties. There has to be some sort of connection.

In case you missed it – highly unlikely due to the enormous sample size – the Aztecs have been “winning” a lot lately. How much, you ask?

Try nine conference championships so far this school year. That’s right. Nine. The most ever in school history.

And we aren’t even done yet.

Women’s soccer (twice), women’s volleyball, football, women’s indoor track and field, women’s swimming and diving, women’s basketball, women’s tennis and men’s tennis. All of these teams, whether in the regular season or the conference tournament, are Mountain West champions.

Nobody else comes near that number. The next closest school? New Mexico (surprising, I know) with a mediocre five conference championships. Two of those – men’s track and field and cross country – came in sports that we don’t even compete in!

Not only have the Aztecs’ won nine titles so far, but there are still several chances for more. Odds are, at least one more crown will be locked up by the time the 2012-13 academic year is complete.

The softball team still has a shot at the regular season title (no conference tournament). Although it would take some late-season heroics, the baseball team could still make a push for a trophy of its own.

Hop on the bandwagon while there’s still room. 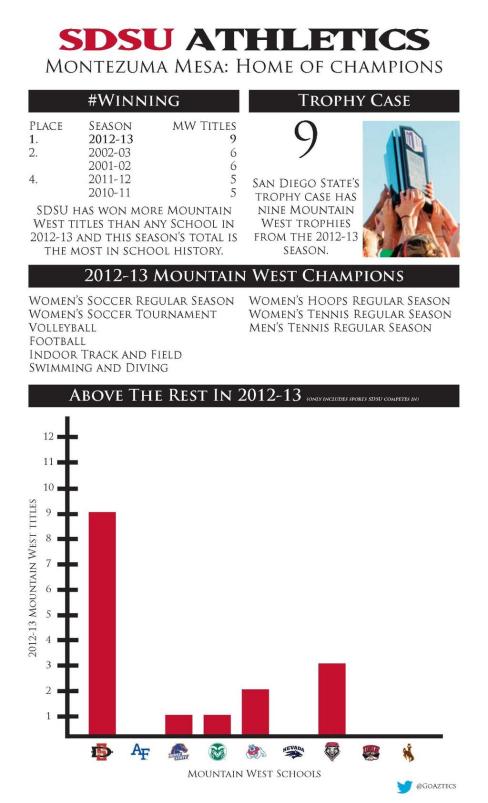 This infographic is a great illustration of San Diego State’s winning ways in 2012-13. Click to enlarge. (SDSU Media Relations)

Last week, we showed the residents of Boston they were in our thoughts and prayers by using a trending hashtag on Twitter. While we continue to pray for the recovery of the city of Boston, lets take over Twitter again. This time, let’s make sure everybody knows who the Aztecs are.

Whether its our athletic success, our beautiful weather, our mouthwatering Mexican food or anything else, let’s make sure everybody knows one thing:

Get on Twitter and tweet something about the best school in the world, and follow it up with the hashtag #SDSUisWinning. Or, log in to Instagram and repost the Charlie Sheen photo with the same hashtag. Maybe even set it as your profile picture on Facebook. Post a link to this story to inform people of our winning ways. Whatever you do, just make sure you let others know about the Red and Black. 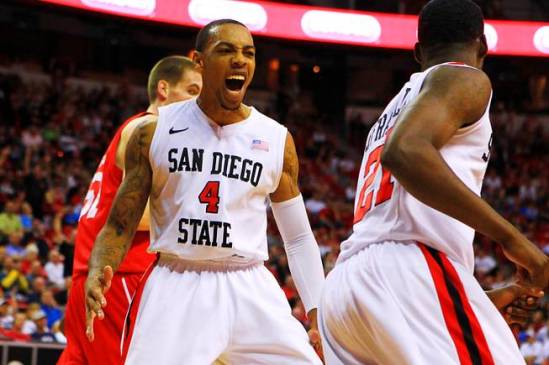 Malcolm Thomas was signed for the remainder of the season on Monday.

As the Malcolm Thomas NBA journey continues, his hard work and talent has finally been rewarded with more than a 10-day contract.

The ‘Aztec For Life’ Thomas signed a 10-day contract with the Golden State Warriors in March, followed by two subsequent 10-day contracts with the Bulls. The Bulls have now inked him for the remainder of the season.

This is great news for Thomas, as the Bulls have already secured a spot in the playoffs. This means he will receive playoff bonuses in addition to his salary for the remainder of the season.