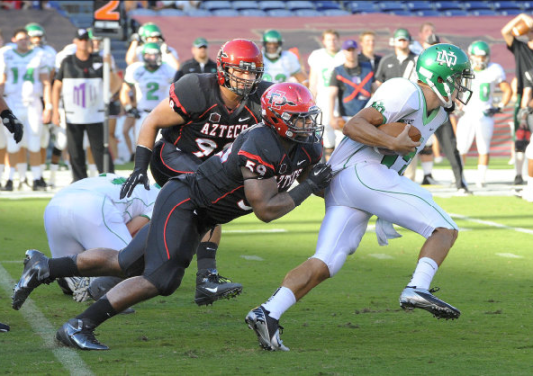 2013 Commitments
With less than a month until signing day, two defensive ends have verbally committed to San Diego State. Dakota Turner and Jordan Watson both look to have promising collegiate careers ahead of them, but they will likely redshirt if they end up signing with the Aztecs due to an immense amount of depth at the defensive end position.

Analysis
For the last two seasons, the defensive line has been a major concern for the Aztecs due to a lack of experience. In 2013, however, things will be different.

Next season, SDSU will bolster a deep defensive line unit after losing just one senior and returning all three starters. Head coach and defensive coordinator Rocky Long is big on rotating players, meaning at least six defensive lineman will see significant playing time. The Aztecs return seven players from this position group who played at least 10 games in 2012.

Meredith is the leader of the group, and he will add to his already impressive skill-set with another offseason of strength and conditioning workouts. Look for him to man the middle and anchor the line with even more consistency as his body continues to develop and gain strength. He will likely add 10-15 pounds to his previously listed weight of 275 pounds.

At the ends, Thomas and Galea are likely to retain their starting jobs as they are the most complete at their position, but don’t be surprised if Onuoha, Beed, or Sanchez make a push for one of their spots. Beed is arguably the best pass rusher in the group, but will have to become more stout in run support to earn a starting role. Onuoha and Sanchez, on the other hand, have great size and can provide solid run support, but will need to improve their pass rushing skills to become starters. With another year of experience under their belts, expect improvement from all the defensive ends, both in pass rush and run support.

Galea’i and Barrett are two names to keep an eye on, as both have a chance to crack the two-deep with a strong offseason. As for the other young linemen in the group (Robert Craighead, Malcolm Jackson, Teddy Queen), it would come as a surprise for any of them to see extensive playing time due to the amount of experience the veterans above them have.

Overall, expect the defensive line to play a key role for the Aztecs next season, clogging the middle on runs and providing more pressure on passing situations than in years past. The improved pass rush should help make up for the loss of shutdown cornerback Leon McFadden, as defensive backs will not be relied on as much in coverage because opposing quarterbacks will be pressured more often.

Prediction
San Diego State’s defensive linemen combined for just 6.5 sacks in 2012. They will double that number and record at least 13 sacks as a group in 2013.