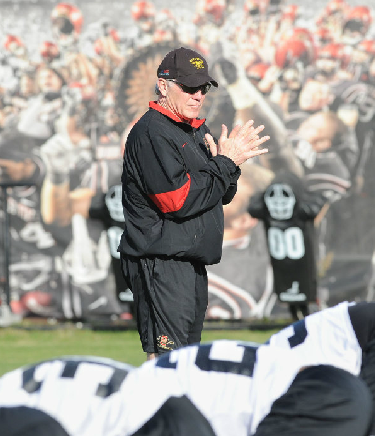 With the second week of San Diego State’s spring football in the books, here are some newsworthy notes and things to keep an eye on:

After promoting an open quarterback competition heading into spring football, it seems that head coach Rocky Long has already given returning starter Adam Dingwell the nod.

Dingwell has received a large majority of the first-team reps so far, and Long expects this trend to continue. Like I have said before, it is very unlikely that Dingwell is not the starter in 2013.

The coaches will now use the rest of spring practices to determine who they feel most comfortable with as the backup quarterback. I see this as a competition between Jake Bernards, Chad Jeffries, and Matt Morin, with Bernards ultimately earning the backup role due to his experience and knowledge of the system.

Need a refresher on the Aztecs quarterback situation? Check out the pre-spring season preview on the quarterbacks.

After losing three tight ends, the Aztecs desperately needed someone to step up this spring, and sophomore Robert Craighead has done just that.

After being moved to the defensive line in 2012 because of the depth at tight end, Craighead was asked to move back to his original position. It was a smart move by the coaching staff, and Craighead has risen to the occasion with two solid weeks of practice.

With the emergence Craighead, I see the tight end position shaping up as follows:

That’s it for this week, Aztec fans. Stay tuned for more in-depth updates in the next two weeks, as I will be in San Diego from March 12-23 and will be able to attend some practices and the spring game.