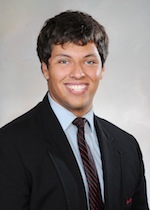 Arthur “Beto” Flores is a 6-foot-5, 300-pound offensive lineman from Denver, Colo. He comes to San Diego State after an impressive career at J.K. Mullen High School, which is the same school that current SDSU offensive linemen Alec Johnson and Jimmy Miller attended. As a senior, Flores was named to the all-state and all-conference teams in both football and track.

Flores has the versatility to play either guard or tackle, and might see time at both spots early on at SDSU. He will likely redshirt in 2012, but with four senior offensive lineman set to depart following this season, Flores will compete for a starting position in 2013. He will wear No. 70 for the Aztecs.

Q: Why did you choose SDSU?
A: I chose San Diego State because it felt like home. The coaches made everything really comfortable for me and reminded me of my high school coaches. I also felt like it was a really good school and the weather is really nice.

Q: How were the summer workouts for you?
A: The summer workouts went well. I thought I came in pretty good shape, but then I got here and the tempo was ridiculously increased. Coach Hall is a tough guy and I loved the workouts.

Q: Have you picked your major yet?
A: I am going to major in computer engineering. I am hoping to work with program developers or to do other stuff with computers because I’m pretty good with them.

Q: What are you most excited for leading up to your first semester at San Diego State?
A: I’m pretty excited just to be around the football team and seeing how the games go. I’m excited to be a part of everything.

Q: What do you like to do during your spare time?
A: I like to just relax. I usually try to focus on football stuff like plays and goals that I have.

Q: Who are your favorite professional sports teams?
A: I am big San Francisco Giants Fan. I also like the Oakland Raiders and the Denver Nuggets. My dad is from San Francisco so everyone on his side of the family likes the Giants and Raiders.

Q: Is there any athlete that you look up to or try to model your game after?
A: I like Michael Oher. The movie “The Blind Side” was pretty inspiring. I also like Tim Tebow, I think he has the right mindset and he is a good player.

Q: If you weren’t a football player, what sport would you be playing?
A: I played basketball and did track in high school, but I also played baseball when I was younger. I would have to say baseball.

Q: How much of an impact did coming from the same high school as Jimmy Miller and Alec Johnson have on your decision to come to San Diego State?
A: It was pretty cool knowing that they came through the same route. It was good to have a connection with those guys and that helped my decision.