If ever a hall of fame was created for multi-talented, all-around sports figures, the candidate list would be quite impressive.

The shrine would not be for the typical superstar athletes, who enter their respective professional sports leagues, have record-breaking careers, and spend the rest of their lives living off of the large surplus of money made during their playing days.

This shrine would be for a select group of individuals; those who have left their footprints in the history of more than just one sport and continue to find ways to stay involved even when their playing days have ceased.

If ever such a thing were created, Brian Sipe would be a worthy candidate.

Growing up in California, Sipe was a sports fanatic from the very beginning. Although he was the only boy in a family with three sisters, he was able to dodge the dollhouses and dress-up parties and find his way onto the local little league baseball team in El Cajon.

In 1961, the small-town El Cajon Little League baseball team shocked the country with an undefeated season that ended with Sipe and his teammates winning the Little League World Series Championship.

The young boys turned into rock stars around the neighborhood, and this success prepared Sipe for the rest of sports career. He expected to succeed.

Although he began with baseball, Sipe experimented with many sports. He played baseball, basketball and football in high school.

“When I was young, baseball was the only option because there weren’t as many youth sports like there are today,” Sipe said. “But as soon as I got a taste of football, I fell in love with it.”

The competitive nature and team camaraderie turned Sipe into a football fiend, and he became obsessed with the sport.

As a quarterback, Sipe was named the CIF Player of the Year in high school after a dominant senior year. He was fortunate enough to receive a football scholarship to nearby San Diego State University.

In college, Sipe excelled for three years under legendary coach Don Coryell, displaying his talent and athleticism every time he took the field. He finished his career with 5,707 total passing yards, and is currently ranked seventh on SDSU’s all-time list.

After flourishing at the collegiate level, it was time for Sipe to take his game to the next level, and he was selected in the 13th round by the Cleveland Browns in the 1972 NFL Draft.

After a few seasons of injuries and role changes, Sipe began to establish himself as a prominent quarterback in the NFL. His most successful season was in 1980, when he led his team to the playoffs with an 11-5 record. He threw for 4,132 yards and 30 touchdowns, and was named the 1980 NFL MVP.

Sipe is known throughout the sports world for being a member of the “Kardiac Kids”, his team’s nickname during the 1979 and 1980 seasons. Those two seasons consisted of several nail-biting victories that brought an incredible amount of excitement to the city of Cleveland and a much-needed boost for the economically burdened town.

Once his playing career was over, Sipe found himself back in San Diego with his wife and their three children. Although he was never a religious man, he and his wife began attending a local Christian church; an idea that they agreed would be beneficial for their family.

He was intrigued at the idea of joining a Bible study group, and doing so helped him grow fond of the religion and its teachings.

“The scripture described everything I believe about mankind,” Sipe said. “After a year or so of attending the study, I was able to surrender my defenses to God.”

Unable to get away from the game he loves, Sipe has spent the last decade of his life in the coaching profession. Ironically, Sipe was invited by his daughter to a Sante Fe Christian High School football game to watch her boyfriend play.

After the game, Sipe decided to offer some help, and the coaches could not turn down the former NFL MVP. In 2000, the head coach retired, and Sipe was asked to take over.

He spent the next eight years as the head coach, making sure to teach his players about God and life first, and football second. A relatively small school, Sante Fe Christian earned respect in San Diego, capturing four CIF section titles during Sipe’s tenure.

In 2008, Sipe was hired as the quarterbacks coach at his alma mater SDSU, a dream job for the former gunslinger. He spent his first three seasons coaching Ryan Lindley, a record-breaking quarterback who is now in the NFL.

Lindley, now a member of the Arizona Cardinals, has nothing but praise for his former coach

“He is an amazing coach on the football field, and even better in life,” Lindley said. “He is a man I can come to about anything from football, to school, to the Bible.”

As for the future, Sipe says that he loves his current job, and hopes to continue coaching for years to come. He has been instrumental in helping to incorporate past traditions into the current football program, and has been a huge asset to the team.

From Little League World Series Champion, to NFL MVP, to Division 1 football coach, Sipe has accomplished a lot. When you look back at his life, it is clear to see that he has left his footprints all over the world of sports.

The best part of it all? He’s not done walking yet. 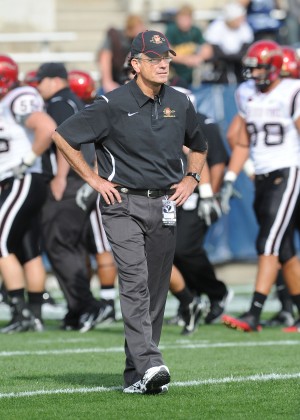