In case you missed it, West Virginia and the Baylor squared off in an aerial shootout last Saturday, combining for 133 points and over 1,200 passing yards.

Heisman candidate Geno Smith and WVU flew away with the victory, knocking off BU, 70-63.

Smith was the pilot in the win, throwing for a jaw-dropping 656 yards and eight touchdowns. Believe it or not, he was still 60 yards shy of the all-time FBS record for passing yards in a game (716 by Houston’s David Klinger in 1990).

So what are the all-time single-game passing records for San Diego State quarterbacks?

In 1991, quarterback David Lowery threw for 568 yards in a game against conference foe, Brigham Young. He completed 26 of 39 passes, and threw for five touchdowns. The game ended in a tie, 52-52. 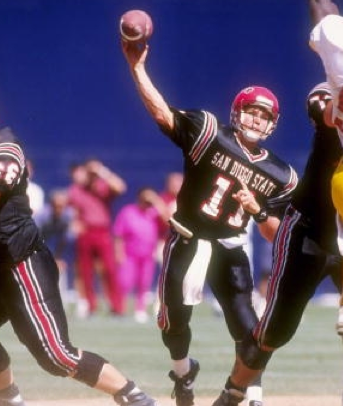 In 1969, quarterback Dennis Shaw threw nine touchdowns passes, a 43-year-old record that has yet to be broken. The Aztecs defeated New Mexico State, 70-21, and went on to have a perfect 11-0 record under illustrious head coach Don Coryell.

That’s it for now. Stay tuned for more Aztec Stat of the Week posts!

3 thoughts on “Aztec Stat of the Week: Single-Game Passing Records”