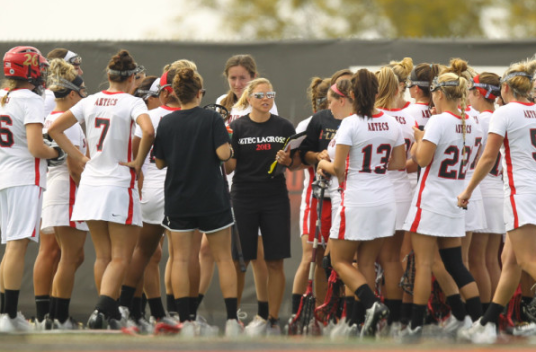 When a Division 1 athletic team is first introduced, the first few years are typically rough.

Blowout losses, recruiting struggles, team chemistry issues – all of these are common.

The San Diego State women’s lacrosse team must have missed that memo.

Although their first year had its fair share of growing pains, head coach Kylee White and the Aztecs are off to an incredible start in just their second season of existence. With an 8-4 record and several marquee wins, these ladies are proving that they are not to be taken lightly.

Despite its youth – one senior, four juniors, 14 sophomores and 11 freshmen – San Diego State has exceeded the expectations of many.

The Aztecs were picked to finish seventh in the 2012 Mountain Pacific Spots Federation Preseason Poll. They tied for fifth place with a 5-10 record.

In this season’s MPSF Preseason Poll, the Aztecs were predicted to finish fifth, and they are on pace to place higher than predicted once again. They are currently tied for third place with a 3-1 record in conference play.

Oregon, who was predicted to finish second in the MPSF, learned first-hand that San Diego State is a team on the rise. The Aztecs traveled to Oregon on March 22 and defeated the Ducks on their home field, 12-10.

San Diego State also has its fair share of blowout victories this season, a clear indicator of the team’s rapid improvement. After winning just one game by double digits in 2012, the Aztecs have already tallied five lopsided wins this season.

In just their second game this season, they trampled Stetson University in Florida, 18-1. Think that’s impressive? They outdid themselves a few weeks later, demolishing Long Island University – Brooklyn by a score of 21-1. Four days later, they added a dominating 19-5 victory over Marquette to their resume.

Offensively, the Aztecs have been led by their deadly trio of attackers – junior Meris Walsh (25 goals) and sophomores Bailey Ewing (34 goals) and Michaela Jarvis (21 goals, 31 assists). San Diego State has established itself as one of the top scoring offenses in the county this season, and it currently ranks fifth in all of Division 1 women’s lacrosse with an average of 14.83 goals per game.

In conclusion, I have one question for all you Aztec fans: Have you made it out to a game yet?

If the answer is no, don’t worry. It’s perfect timing.

San Diego State takes on California (7-4, 4-0 MPSF) in a crucial conference battle at the Aztec Lacrosse Field this Sunday, April 14, at 12 p.m PST. Admission is free.

Get out there and support the Lady Aztecs!

One thought on “SDSU Women’s Lacrosse: Ahead of Schedule”