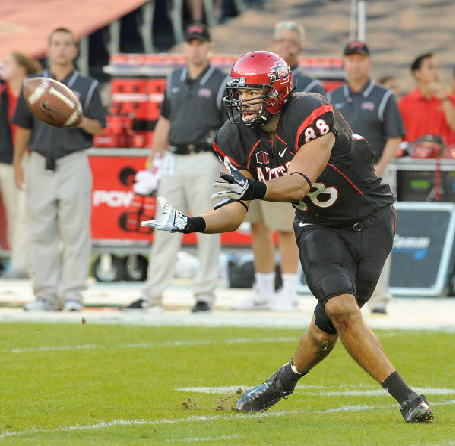 At 6-foot-6, 255 pounds, junior tight end Gavin Escobar is a nightmare to opposing defenses. With a rare blend of size and athleticism, Escobar has an incredible ability to get himself open. Too big for defensive backs and too quick for linebackers, he is nearly impossible to cover.

But is Escobar the greatest tight end to ever play at San Diego State?

A look at the all-time record books shows that, according to the stats, someone else might have the edge.

There are two categories in the record books that are specific to tight ends: Most receptions and most receiving yards by a tight end in a single season. Escobar is second in both categories, with 51 catches and 780 yards in 2011.

So who sits ahead on Escobar on both lists?

According to the “Records” section in the 2012 SDSU football media guide, Tim Delaney holds both records for most receptions and most receiving yards in a season by a tight end. He had 62 catches for 794 yards in 1970.

In his three-year career, Delaney had 180 receptions for 2,535 yards and 22 touchdowns, all top-10 marks in the SDSU record books.

But after digging even deeper into the archives, it can be found that Delaney was 5-foot-11, 190 pounds, far from the size of a prototypical tight end.

“He was more of a slot receiver for us,” said Brian Sipe, SDSU’s starting quarterback in 1970. “He never really put his hand in the ground like a tight end.”

If Tim Delaney is eliminated from the tight end rankings, who else is there?

But neither Reed-Martin nor Awalt had the consistency of Escobar.

Reed-Martin’s next best season was in 1988, when he had 34 receptions for 276 yards and one touchdown. He also saw action in 1986, but played a limited role as the backup to Awalt.

Awalt, who went on to have a successful seven-year NFL career, played just two seasons at SDSU. He had 15 catches for 181 yards and two touchdowns in his first season in 1985.

Although his collegiate stats are tough to track down, former Aztec tight end Don Warren had arguably the best professional career. In 14 seasons with the Washington Redskins, Warren amassed 193 catches, 2,536 receiving yards and seven touchdowns.

He was also an exceptional blocker, as he was a part of the group of players nicknamed “The Hogs” along with the Redskins’ offensive lineman. These players were known for their tough and gritty play in the trenches, and were an integral part of the Redskins’ success in the 1980s and 1990s.

In his career thus far, Escobar has 110 receptions for 1,528 yards and 16 touchdowns. There are not specific categories in the SDSU record books that show career leaders in receptions and yards by a tight end, but it’s safe to say that no one has outdone Escobar.

Awalt was impressive in the NFL, with career totals of 138 catches, 1,583 receiving yards and 10 touchdowns, but his production at SDSU was less than that of Escobar’s.

Warren had the best NFL career, winning three Super Bowls and trumping Awalt’s total receptions and receiving yards, but he also did not put up the numbers in college that Escobar has accumulated.

So Aztec fans, what do you think? Is Gavin Escobar the greatest tight end to ever play at San Diego State?

Since his football career is still very young, the better question may be, will Escobar be the greatest when it’s all said and done?

Leave a comment and let me know what you think!

Did you miss last week’s “Stat of the Week” post about overtime games? Check it out here!

7 thoughts on “Aztec Stat of the Week: Tight End Records”