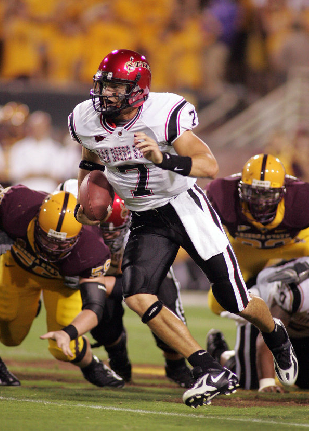 From 2004-2007, Kevin O’Connell could often be found on the field at Qualcomm Stadium, gashing opposing defenses in the air and on the ground while playing quarterback for the San Diego State Aztecs.

Today, O’Connell can be found on the same field once again, only this time around, he has a new role – sideline reporter.

After spending four seasons in the NFL, O’Connell is back in familiar territory, pursuing a new career while still keeping his options open. He found himself as a free agent when the 2012 season began after three seasons with the New York Jets, one with the New England Patriots, and brief stints with the Detroit Lions, Miami Dolphins, and San Diego Chargers.

Bouncing around in the NFL was nothing new to O’Connell, however, as he grew accustomed to the lifestyle as a child. His father worked for the government and was transferred often, which led to new homes in new locations for the family.

Originally born in Knoxville, Tenn., O’Connell moved to Middletown, N.J. with his family at a young age. Then, at the age of 10, another relocation surfaced, and he and his family jumped coast-to-coast and headed west to Carlsbad, Calif.

“I hated the idea at first, I didn’t want to go at the time,” O’Connell said. “But once I got there I loved it. The people, the environment, the ambition; I really enjoyed it all.”

O’Connell attended La Costa Canyon High School and was a standout in both basketball and football. His potential was on the gridiron, however, and he realized it quickly despite admitting basketball was his first love.

After a successful high school career, O’Connell caught the eyes of numerous college scouts. Colorado, San Diego State, and various Mountain West Conference schools all expressed interest in the athletic, 6-foot-6 quarterback. After weighing his options, it became an easy decision for O’Connell to stay in San Diego.

“It made the most sense to me to stay home,” he said. “The coaches did a great job recruiting me, and it became a no-brainer for me to come to SDSU.”

It didn’t take long for O’Connell to get on the field at SDSU. After redshirting in 2003, he saw playing time immediately as a redshirt freshman in 2004, and started the final five games of the season.

In his four years in the red and black, O’Connell made plays both through the air and on the ground. A rare dual-threat quarterback, he is arguably the best running quarterback to ever don an Aztec uniform, and he has the numbers to prove it.

O’Connell finished his career with 7,689 passing yards and 46 touchdown passes, both top-five marks in SDSU history.

But the statistics don’t stop there.

He also rushed for 1,312 yards and 19 touchdowns, both all-time records for SDSU quarterbacks.

Aside from the chart-topping numbers, O’Connell took a lot from his college years, and credits his former teammates for helping him develop as a leader.

“There was a good core group of guys there, guys like Adam Hall, Kirk Morrison, and Joe Martin,” O’Connell said. “I got to play pretty early on and that helped me get closer with the older guys. I learned things from them that really helped me as a leader when I became older.”

When it was O’Connell’s turn to become a leader, his positive attitude and work ethic rubbed off on others despite struggles with the team.

“He was very personable to everyone,” said Chargers wide receiver Vincent Brown, who was a freshman at SDSU during O’Connell’s senior year in 2007. “Even when we weren’t doing too well, he always rallied everyone and worked hard. He was a great leader.”

Following his collegiate career, O’Connell was drafted in the third round of the 2008 NFL Draft by the New England Patriots. After Tom Brady went down with a torn ACL early in the 2008 season, O’Connell spent the year as the backup quarterback to Matt Cassel. He became a sponge, absorbing all the knowledge he could from the two veterans.

After the 2009 season, O’Connell was picked up by the Detroit Lions, but was traded to the New York Jets shortly after. He spent three seasons with the Jets, and although he didn’t see many playing opportunities, he still took a lot from the experience.

“I’ve learned a ton from my years in NFL,” O’Connell said. “There are some things opportunity-wise I would love to have had, but it’s never going to be a perfect situation when it’s so competitive. You have to make the most of it and take the experiences, relationships and memories and apply them to the rest of your life.”

When the 2012 season was approaching, O’Connell decided to pursue a backup plan in case he was unable to catch on with a new team. He began working with KOGO Radio 600 as the sideline reporter for the SDSU broadcast team, a profession that he had been interested in for some time.

“My number one goal was always to play in the NFL, and if I wasn’t able to do that I wanted to coach or be a part of broadcasting,” O’Connell said. “In college, I became the guy that got put in front of a microphone a lot, whether it was good times or bad times. People would always tell me I had a future in broadcasting if I ever wanted to do that, and I always did.”

So far this year, O’Connell has also worked with XX Sports Radio 1090, XTRA Sports 1360, and has even made on-camera television appearances with NBC 7/39 San Diego.

But he has not hung up the football cleats just yet.

“The great thing about broadcasting is I always know my schedule so I can still work out,” he said. “I’ve been able to throw balls with some former Aztec receivers who are trying to catch on with some teams as well. The one thing that would pull me away from the broadcasting would be if an opportunity did come up to be a part of a team again.”

Some of those receivers include Demarco Sampson, Roberto Wallace, and Brett Swain, all former teammates of O’Connell’s who are currently free agents. He also regularly worked out with Brown over the summer, and has been a mentor to the second-year NFL wide receiver.

“Kevin always wants to work and stay on top of his game,” Brown said. “He will call guys up and try to get some receivers to throw to. He’s been really helpful for me since I got to the NFL. He gave me a lot advice on what to expect and how to work.”

As for what’s next, O’Connell says he hopes to establish himself in the sports broadcasting field if football doesn’t work out. He also added that if broadcasting is not filling the void of playing football, he might pursue coaching at the Division 1 level.

Thinking about the future is a bit much for O’Connell, however, as he is still trying to catch his breath after being consumed with playing football for over a decade.

“We will see, I don’t really know yet,” he said when talking about his future plans. “This is the first fall in about 15 years that I’m not playing football. I’m trying to take it one day at a time for now.

“I am so appreciative of San Diego State for allowing me to have the broadcasting opportunity this fall. I want to uplift this program and bring as much appreciation to the players and staff as I possibly can. My number one goal for now is to bring the program to the level of notoriety and interest that it deserves.” 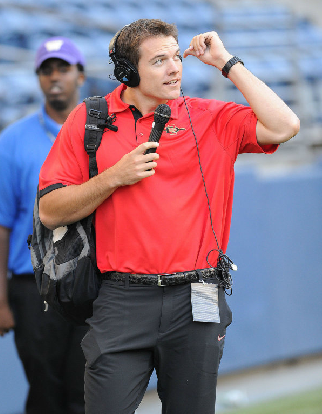