Quarterback Adam Dingwell (6) returns in 2013 and will try to lead the Aztecs in his first full season as the starter. (Ernie Anderson/SDSU Media Relations)

2013 Commitments
San Diego State does not have any quarterback commits in the 2013 class, but Chase Favreau, a 2012 signee, is expected to join the team in the spring after grayshirting last season.

Analysis
Although San Diego State fans have often pointed the finger at Dingwell for the collapse against BYU, there were several factors that contributed to the loss.

Field position was arguably the difference in the game, as BYU’s punter Riley Stephenson pinned the Aztecs inside their own 5-yard line five times. Dingwell was pressured throughout the game, and although he made some mistakes, many of the painful plays were not solely his fault.

Dingwell did not play his best in the Poinsettia Bowl, but San Diego State fans should not forget the 5-game win streak that he helped orchestrate, highlighted by come-from-behind road victories against Nevada and Boise State. His performance against Nevada, coming off the bench to replace the injured Katz, proved his incredible work ethic, as he could not have played at such a high level without tireless preparation. Ending the season on a bitter note will only fuel him more in the offseason.

With a new offensive coordinator, it is likely that the staff promotes an open battle for the starting quarterback job in the offseason. Although Bernards is consistent and knowledgeable and Morin and Jeffries are skilled young players, look for Dingwell to improve his fundamentals in the offseason and retain the starting job due to his gritty demeanor, work ethic and leadership skills.

There is no substitute for experience, and this makes Dingwell the clear frontrunner. With last season under his belt, expect a new and improved Dingwell in 2013.

2013 Commitments
San Diego State currently has four offensive lineman commits. Lenicio Noble and Braxton Isaac are two junior college transfers expected to sign, while Sergio Phillips and Antonio Rosales are high school commits. Expect all four to redshirt in 2013, as it is extremely difficult for a lineman to learn the offense and compete for playing time right away. Noble, who is expected to join the team in the spring and compete for the starting center spot, is the most likely of the bunch to see the field next season.

Analysis
Last season, San Diego State’s offensive lineman, led by newly hired offensive line coach Mike Schmidt, exceeded expectations and helped the Aztecs rush for over 220 yards per game. Next season, they will need to find replacements for Johnson and Embernate, its most experienced lineman in 2012.

Keep an eye on Smith and Maass in spring practices and fall camp, as they will likely battle to replace Johnson for the starting center spot. Both are skilled linemen, but they will need to get stronger and add weight in the offseason if they want to be effective in 2013. Noble will also be in the mix, but he will need to learn the offense quickly in the spring and gain ground on Smith and Maass if he wants a chance to play next season.

At right guard, Siragusa has a solid chance to win the job in 2013. He impressed the coaches last season, showing flashes of talent throughout fall camp. Although his youth and inexperience might be worrisome, he is one of the strongest offensive lineman and will get a ton of reps in the offseason. He and Corbett will likely be the frontrunners to replace Embernate, but don’t be surprised if some of the other young linemen get reps at the position in spring practices and fall camp.

In their first season as starters on the offensive line, Quigley, Gordon and Dilley played fairly well as a group. All three return in 2013, and will continue to pave the way for an explosive ground attack.

Pass protection will be the main focus for the offensive line in the offseason, as the Aztecs allowed 35 sacks last year, ranking them in the bottom 20 of all Division 1 FBS teams. Expect Quigley and Dilley to improve their fundamentals in the offseason and help San Diego State drastically reduce its total number of sacks in 2013.

Prediction
Quigley will be a first-team all-conference selection in 2013. 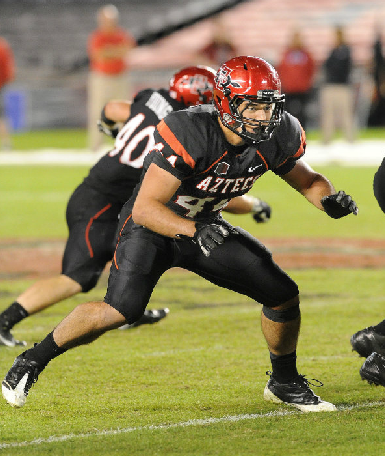 2013 Commitments
San Diego State has two tight end commits in the 2013 recruiting class. David Wells and junior college transfer Dominique Bierria are expected to sign with the Aztecs, and both will make a push for playing time next season.

Toledo plans to run a pro-style offensive, similar to what former offensive coordinators Andy Ludwig and Al Borges ran, but with three tight ends leaving, he will likely cater his play-calling tendencies to his strengths.

While there is plenty of talent among the tight end group in 2013, experience is lacking, as Roberts is the only returning tight end who played last season. This will likely lead to fewer two-tight end formations and more sets with a fullback or a third wide receiver. The Aztecs won’t abandon the tight end completely, however, as Roberts, Boesch and likely one or two others will see playing time next season. Expect Wells, Bierria, and redshirt junior Mike Miller to compete for playing time in fall camp. Also, don’t be surprised if the coaches flirt with the idea of moving former tight end and current defensive lineman Robert Craighead back to his original position. If this switch occurs, look for Craighead, a redshirt sophomore, to be in the mix for immediate playing time as well.

One thing to keep an eye on is the involvement of Toledo with the tight ends from a coaching standpoint. Because it already has the maximum number of assistants, San Diego State will not be able to hire a tight ends coach once again in 2013. The Aztecs were able to get away with not having a designated tight ends coach in years past because of the depth and experience of the tight ends, but things will be different next season.

Last season, Ludwig was listed as the tight ends coach and first-year graduate assistant Dorian Keller helped out with the position. With a young and inexperienced group, it is imperative that Toledo pays close attention to the tight ends throughout the offseason, as they will need his wisdom and expertise to progress and improve.

Prediction
Wells or Bierria will see significant playing time in their first season with the Aztecs in 2013.