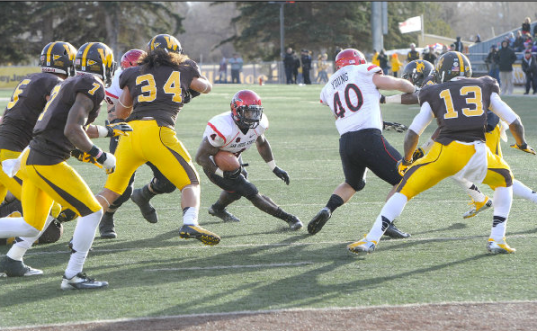 2013 Commitments
Currently, San Diego State has just one definite running back commit, Donnel Pumphrey out of Nevada. Although Pumphrey is a talented three-star recruit with several Division 1 offers, he will likely redshirt due to the amount of depth the Aztecs have at running back. Marcus Stamps has also committed, and although he will likely play running back, don’t be surprised if he ends up at linebacker. Due to the depth at both positions, it is a safe bet that he will redshirt at either spot.

Analysis
Entering the 2012 season, one of the biggest concerns surrounding San Diego State was the loss of star running back Ronnie Hillman, who left school early and was drafted in the third round by the Denver Broncos.

Luckily for the Aztecs, the two-headed monster of Muema and Kazee filled the void, and helped fans forget about Hillman with their exceptional play. Together, Muema and Kazee led a ground attack that was just as explosive, if not more, than it had been in years past, rushing for a combined 2,270 yards and 24 touchdowns.

Price is the frontrunner, as he showed his abilities last season when filling in for the injured Kazee. Hardwick could have potentially made a push for the third spot on the depth chart behind Muema and Kazee last season, but an injury a week before the season began kept him out for the majority of the year. Look for him to get several opportunities to show his talent in spring practices and fall camp.

Garrett has good size, but will need a strong offseason to climb the depth chart. Although just one of the four is likely to receive a significant number of carries, expect the other three to make an impact on special teams in 2013 (i.e., Garrett’s blocked punt vs. Boise State).

At the fullback position, look for the same hard-nosed, smash-mouth style of football from the third-year starter Young. He will continue to bulldoze through the hole and open running lanes for Muema and the other backs next season, and will also be utilized in the passing game. He displayed his ability to catch the ball out of the backfield last year, especially on play-action passes in goal-line and short-yardage situations, and will likely see more balls thrown his way in 2013.

Prediction
Muema will rush for over 1,600 yards in 2013. He will also see an increased role in the passing game and will have over 250 receiving yards.