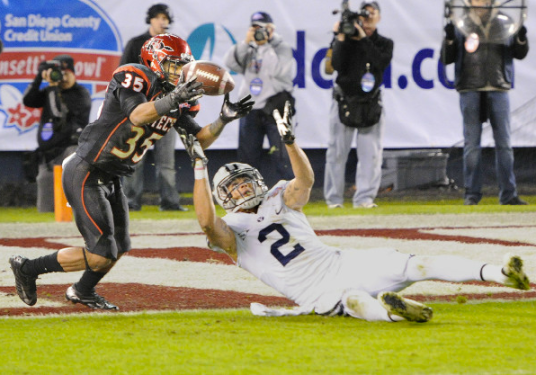 2013 Commitments
As of now, Billy Vaughn Jr., Addison Morrow and Kalan Montgomery are three commits who will likely play cornerback. Don’t be surprised if Montgomery, a three-star recruit, makes a push for playing time in the fall. Vaughn Jr. possesses a good combination of size and speed and could also potentially see playing time as a true freshman, but it is likely that he, along with Morrow, will redshirt in 2013.

Analysis
The cornerback position is a serious question mark for the San Diego State defense entering the 2013 season. With McFadden and Wade leaving, the Aztecs need to find two new starters from a group of mostly young, inexperienced players.

Luckily for San Diego State, Holder finished the 2012 season playing at a high level and had an exceptional performance in the bowl game. Expect him to secure one of the starting cornerback spots early on.

The question of who starts alongside Holder is where the uncertainty arises, as none of the other cornerbacks have seen significant playing time on defense. Romain and Lamar saw action on special teams in 2012, and both could make a push for one of the starting spots in 2013. Between those two, Keels, Whittaker and Kazee, look for a heated competition through spring practice and fall camp to determine the other starter.

Keels appears to be the frontrunner, as he is a physical corner with good size and will be entering his fourth season with the Aztecs. Don’t be surprised if Kazee turns some heads in the offseason as well, and forces the coaching staff to consider giving him a chance despite his youth and lack of experience. If Whittaker is able to stay healthy, he could also make a push for a starting job.

Prediction
Holder will have at least three interceptions in 2013, and return one of them for a touchdown.