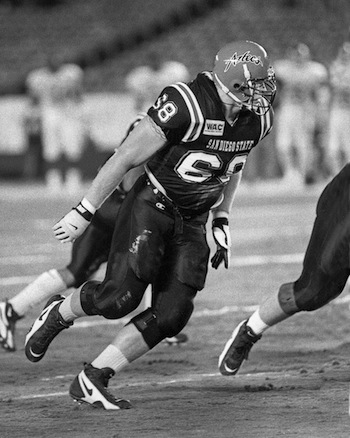 If you ask a San Diego State football fan about Kyle Turley, they’ll likely remember him as a consensus All-American that went on to be a first-round pick in the 1998 NFL draft.

If you ask an NFL fan about Turley, they will likely remember him as the man who did everything in his power to protect his quarterback, even if it meant ripping off an opponent’s helmet and launching it into the air.

If you ask these same people about what Turley is doing today, however, it’s unlikely they’ll know about the musician who has been touring the country, performing songs from his albums and raising money for a charity that supports retired NFL players.

That is who Turley is today, and if you ask him, it’s all because of the journey he endured and the people he met along the way.

Turley was born in Provo, Utah, but moved to California at a young age. Before he was on the football field, he could be found skateboarding, surfing, or wrestling for his high school team. It wasn’t until his senior year that Turley played football, and he was put at defensive end and told to simply tackle the ball carrier.

Even though Turley played just one year of high school football, several schools were interested in his raw talent. Iowa State, San Diego State and others extended scholarship offers to Turley, and he took his official visits to help him make his decision.

SDSU was Turley’s third visit, and it ended up being an easy decision for him as he accepted their offer and cancelled the rest of his trips to other schools.

“I grew up surfing and skating, and when I stepped off the plane in Iowa there was three feet of snow and we couldn’t see the football field,” Turley said. “All that wasn’t for me, I was a California kid. I’m glad I made the decision, because I don’t think I would have enjoyed school at any other college like I did at San Diego State.”

After redshirting in 1993, Turley had another decision to make when a new coaching staff came in before the next season.

Ted Tollner was hired as the head coach, and he told his players in the first meeting that they could try whatever position they wanted. Turley, who played both offensive and defensive line on the scout team the previous season, chose offensive line.

“It was really tempting for me to play defense. I loved defense, but I also wanted to work with (offensive line coach) Ed White,” Turley said. “It was a tough switch. Reading the play cards for scout team was easy, but I realized quickly how difficult it was because there was a lot more to think about. It took a lot of dedication and mental preparation.”

The switch turned out to be every bit worth it, as Turley went on to have a stellar career at San Diego State at offensive tackle. After being named a consensus All-American in 1997, the New Orleans Saints selected Turley with the seventh overall pick in the 1998 NFL Draft.

Ironically, Turley was finally able to block for former Aztec running back Marshall Faulk. They were teammates at San Diego State, but Faulk’s last season was the same year Turley redshirted, keeping the two from being on the field together in college. They played together on the Rams in 2003 and 2004.

Turley’s NFL career was cut short due to a string of injuries, but he knew he had much more life to live. After taking a year off to clear his head, Turley decided to move to Nashville, Tenn. and pursue a music career.

An avid fan of music, Turley picked up a guitar at a young age and never let it go. He was also a security guard in college, a side job that helped him earn money and gave him the opportunity to work at concerts of several big-time bands performing in San Diego.

Although many former NFL players would expect shortcuts en route to their next occupation, Turley took the same road any other aspiring musician would.

“I moved to Nashville and went to all the little honky-tonks around town and signed up for open mic nights,” Turley said. “Nobody really knew who I was around there so I could just go out and do my thing. I didn’t have to really talk to anyone; I could just go work on my skills. I ended up recording a record and here we are today.”

Today, Turley has released two albums, and is the co-founder of Gridiron Records. In 2011, Turley launched the Gridiron Tail Gate Tour, where he and others performed at tailgates and local venues at several NFL and college football games.

Gridiron Records is a supporter of the Gridiron Greats Assistance Fund, a non-profit charity organization that helps retired NFL players in need. Turley began donating to Gridiron Greats in 2007 after learning about the organization from Mike Ditka, his former head coach with the New Orleans Saints.

“I knew right away that it would be a great organization that has a true heart for the players,” Turley said. “I decided I’m going to make a difference in this game for the guys that built it and the guys that keep it going. I jumped in feet-first and I haven’t looked back.”

Turley is currently working on his third album, and is now a member of the board of directors for Gridiron Greats. He loves his music career and says that he wants to continue to make music for the rest of his life. Ironically, he feels similar to how he did before making the difficult transition to offensive line.

After years of battling in the trenches of the offensive line, Turley is finally free again.

He doesn’t have to find a ball carrier to tackle; it’s just him and the music.

Turley throwing the spear into the ground before a game in the 2011 season. He was a member of the SDSU Hall of Fame Class of 2011. (Ernie Anderson/SDSU Media Relations)