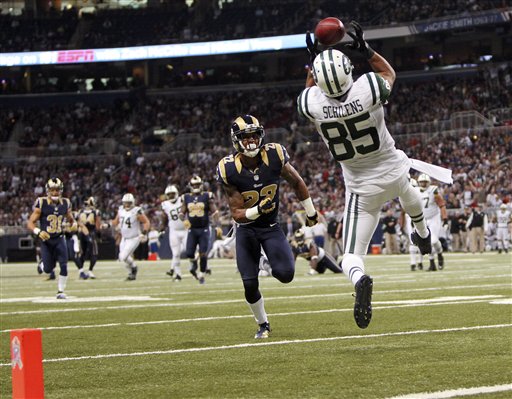 LB Russell Allen – Jacksonville Jaguars vs. Houston Texans
In an offensive showdown that saw nearly 1,100 yards of total offense, the Jaguars lost to the Texans in overtime, 43-37. Allen was all over the field on defense, recording 15 total tackles. He now ranks fifth in the league with 67 solo tackles and is tied for eighth with 85 total tackles.

LB Antwan Applewhite – Carolina Panthers vs. Tampa Bay Buccaneers
The Panthers fell to the Buccaneers, 27-21. Applewhite was inactive for the fourth straight week after suffering a hamstring injury in Week 7. His status for Week 12 is uncertain.

LS Aaron Brewer – Denver Broncos vs. San Diego Chargers
The Broncos continued their strong play and won their fifth straight game as they defeated the Chargers, 30-23. Brewer remained solid with his snapping duties, helping the special teams unit make three field goals and punt five times for an average of 50.4 yards per punt.

WR Vincent Brown – San Diego Chargers vs. Denver Broncos
Brown remains out with an ankle injury suffered in the preseason. It was reported last week that he was running once again and is making progress, but there is no clear timetable on his return.

LB Miles Burris – Oakland Raiders vs. New Orleans Saints
Without star running back Darren McFadden for the second straight week, the injury-depleted Raiders could not handle the high-powered offense of the Saints, and lost 38-17. Burris, however, had an impressive outing on the defensive side of the ball with eight total tackles.

OT/OG Brandyn Dombrowski – San Diego Chargers vs. Denver Broncos
Dombrowski returned to practice two weeks ago after sitting out with a foot injury, but it is still uncertain if he will see any game action this season.

RB Ronnie Hillman – Denver Broncos vs. San Diego Chargers
After an injury to starting running back Willis McGahee, Hillman came in and helped the Broncos take down the struggling Chargers. He had 12 carries for 43 yards and two catches for 16 yards. He will likely start at running back next week, as McGahee is expected to be out 6-8 weeks.

QB Ryan Lindley – Arizona Cardinals vs. Atlanta Falcons
After a shaky start by John Skelton, Cardinals’ head coach Ken Whisenhunt gave Lindley a chance to take over under center. Lindley, who had to battle back from a questionable fumble call that resulted in a Falcons touchdown, was 9-20 for 64 yards in his first-ever NFL action. In a game that went down to the final minutes, the Cardinals lost to the Falcons, 23-19. It has not yet been decided who will start at quarterback next week, but it seems likely that Lindley is now the guy in Arizona.

OG Lance Louis – Chicago Bears vs. San Francisco 49ers
In the battle of backup quarterbacks, Jason Campbell and the Bears lost to Colin Kaepernick and the 49ers on Monday night, 32-7. Louis and his offensive lineman had their hands full with the 49ers’ pass rushers, and the Bears’ record dropped to 7-3.

LB Kirk Morrison – Buffalo Bills vs. Miami Dolphins
The Bills defeated the Dolphins, 19-14, but Morrison was inactive once again. He has yet to see any game action this season.

WR Kassim Osgood – Detroit Lions vs. Green Bay Packers
In a heated division battle, the Lions fell to the Packers, 24-20. Osgood continues to play on special teams but did not record any tackles in the game.

WR Chaz Schilens – New York Jets vs. St. Louis Rams
The Jets beat the Rams on Sunday, 27-13, and Schilens had a solid game. He hauled in four catches for 48 yards and one touchdown. It was his second touchdown of the season and ninth of his career.

Did you miss the “Aztecs in the NFL: Week 10″ post? Check it out here!